How to Build an Earth Oven 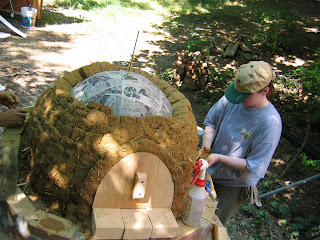 Do you remember your teachers asking you on the first week of school what you did for your summer vacation? Well, if I were still in school, this would have been a story to amaze my teacher and classmates.
My friend, TH, is an amazing baker and cook. She is also very wise in the ways of crafts and organizing activities that bring diverse people together.

Her great ambition has been to build and use a wood-fired oven in her own backyard. TH is not someone who merely dreams big -- she builds! She did her homework and found a book by Kiko Denzer called Build Your Own Earth Oven. She also found a website showing a group of masons who built an oven of the type she wanted using Kiko Denzer's model. Here is another website I found of a group of Australian gardeners built a similar oven.
Then she and her dad cooked up a scheme to build a test model in his backyard as a practice version. Her two teenage sons helped their grandad build the test oven. This was very wise since they notice a water-seepage problem because the test oven had no drain. So, they knew they had to make drainage holes in TH's oven.
TH's Dad drew plans up for brick foundations to be built in her backyard over the course of several summer weeks with the help of his grandsons. Then, the next step was to create the inner oven wall, made entirely of cobb, that is, clay from a local source, plus sand, mixed with straw.
And that's where I come into the "Earth Oven Project 2008," because TH invited me and a group of her friends and neighbors to be a part of the oven's creation.
It was an extremely hot (mid 90s F) day in mid-July, but not so humid as Maryland suburbs can be in this season. When I arrived on the scene, the boys were mixing cobb, as the English settlers to North America called it. Cobb is the blend of clay, sand, and straw that forms the bricks to create the earth oven. 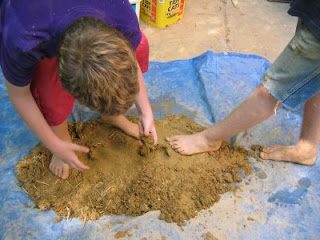 Here's an image of the boys pounding it out by foot and testing its moisture content.


While the boys were mixing cobb, it was up to the rest of us to prepare the igloo-shaped sand mound around which the inner oven insulation would be formed. 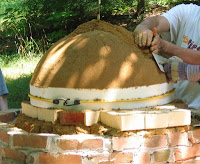 After we made the sand mound (notice the brace we used to prevent sand from rolling off the edge), we covered the sand with wet newspaper, rather like you would a form for papier maché. By the time all hands had covered the sand mound with newspaper, TH's husband G had laid out a delicious spread for a hardy lunch. I had brought the beer and cider and there were copious amounts of herbal infusions and lemonade available for thirsty workers.
The next phase was to cover the entire sand mound with cobb bricks, so we spent the remainder of the afternoon doing just that. A shady yard and a bit of breeze go a long way to making summer's heat bearable. So does telling stories, laughter, and watching the boys rough-housing. We generally had a merry time at it, despite the heat. 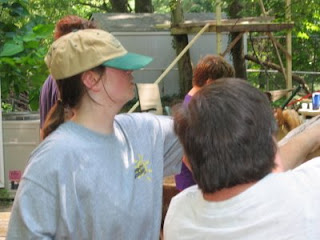 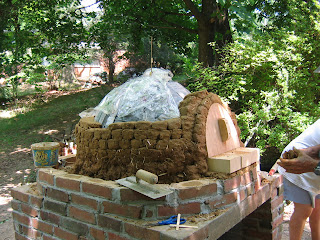 Finally, about 5:00 p.m. we neared the home stretch. Only a tiny hole a the top of the insulation layer remained. 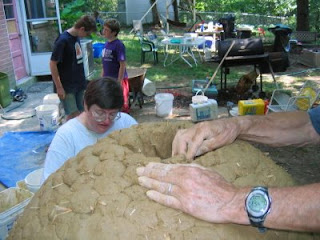 It takes something very interesting indeed to get me out on a 90-degree day, but this project was well worth it. I can remember with fondness mushing mudpies in my hands, but this is the most ambitious "mudpie" experiment I have witnessed. It's also very like molding a clay pot on a grand scale. The end result is larger than any typical potter might attempt on her/his own. The very social aspect of building something like the earth oven as part of a group, including several families, several generations is not unlike our pioneer ancestors did when a house frame or community barn needed to be built.
The outer layer of insulation and the final brick housing for TH's oven will be constructed by her, her family and friends next weekend.
I look forward to coming over to her house someday soon to enjoy wood-fired bread or pizza baked in her backyard.

PS. if you wish to know more about this fabulous earth oven, please contact my friend who runs Dances with Loaves in Maryland.
Posted by Unknown at 04:25